Anyone who knows me knows that I am what you might call a Crazy Cat Lady. I grew up with both dogs and cats, but felines were always my favorite. Now that I’m living away from my parents, I have continued on the long and winding path of the insane feline lover. 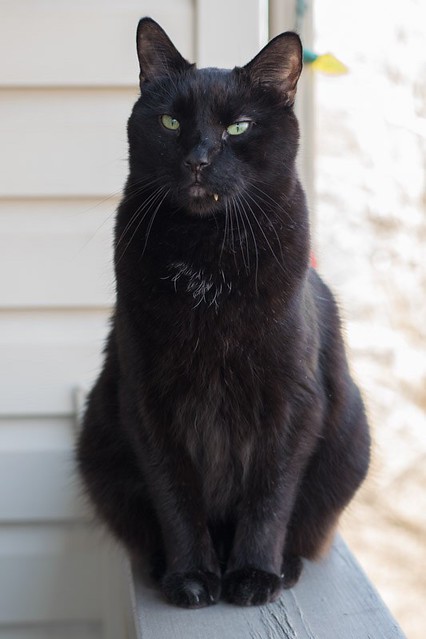 When my roomie and I first moved out on our own, we each took our cat with us, giving us a grand total of two. Omi was my clingy and needy black baby (who is actually the elder, currently 13 years old) and Phantom was her crazy grey cat (who we now believe to be at least part Korat). This was an acceptable amount of cats for us, and worked perfectly well for the first three years we were on our own. 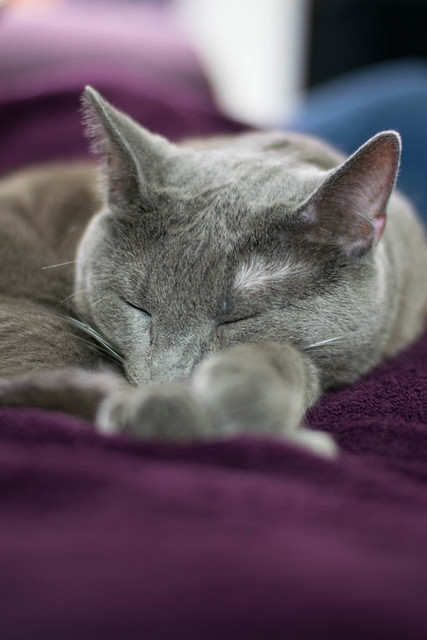 Then, in the fateful summer of 2014, I waltzed into a pet store with the intention of maybe picking up some cat food. It was my mother who really needed to be there; I was just along for the ride. Right by the entrance doors, a rescue group had a few cages set up, and inside were an assortment of kittens.

One kitten in particular caught my eye, with the way she was climbing the sides of her cage like a crazy monkey. She was a calico, and while I normally hadn’t given calicoes much thought (as some of their patterns I’m not particularly fond of), something about hers pleased me. It was an impulse adoption for sure, but she ended up coming home with us, and we named her Rio. 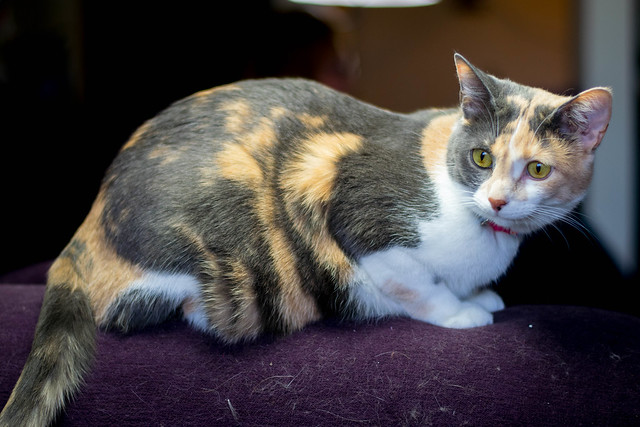 Rio pretty much took over the place as soon as we brought her in. The first day, we left my room door open, with a big TV box blocking the way (so the boys couldn’t get in, but she couldn’t get out). By the time we came home from work, the box was knocked over, and the fearless kitten was out roaming around. In no time, she was the mother of the bunch, grooming the boys into submission and giving Phantom a much needed playmate. (Omi, while playful on his own, has never really gotten along with Phantom in terms of play – it usually ends in hissing).

And it was there that I said I was good – no more cats. At least not until we got a house, or one of the other cats passed away (something I hope never happens – hah!)

Cue a moment of weakness. 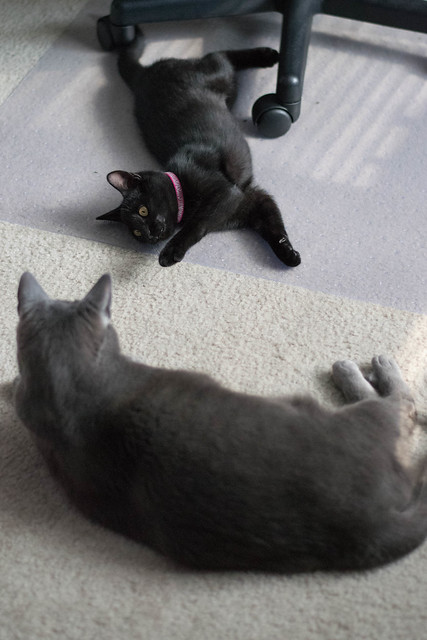 I saw her picture on the Missouri Humane Society’s website. She was adorable and black, and I fell in love right away. However, she was a kitten, and I didn’t have anywhere near the adoption fee for one. But, they just HAD to run a special on kitten adoptions. I just HAD to swing by after work one day.

OK, I admit this was pushing it. For just the two of us, it was a lot to handle. However, I knew we could manage. Aya has turned out to be a handful, though. Christmas tree scaler, poster clawer, and expert of the extended meow, she’s fit in rather nicely with the younger group, zooming around the apartment with them whenever she gets a wild hair up her bum.

It was there that I anticipated our family stopping, and it likely would have, if not for some unsavory neighbors a few buildings over.

This apartment, you see, was on our way out of the complex. In the spring, when driving by, we noticed a calico cat sitting on the deck of this apartment, watching the cars go by. The weather was lovely, and I didn’t think much of the owners wanting their little kitty to get some sunshine and fresh air. It continued into the summer, when temperatures were rather mild, and we looked forward to seeing her there.

Late summer, we stopped seeing her, and didn’t see her throughout the fall. It was early December when we noticed a tiny calico cat sitting on the outside steps leading up to that particular apartment. I don’t know if it was the same cat or not, and judging by her size I guess not, but we figured she just got out and her owners would get her back in once they got home.

However, that night, I came home from class and she was still outside. It was cold and expected to get rather chilly that night, so after much fussing and debating, I went up and knocked on the door.

“Do you have a calico cat who got out?”
“I don’t know what she is, but yeah, we have a cat.”
“I have her in my car currently. It’s pretty cold out and I didn’t want to her to freeze.”
“Oh she’s crazy. She runs out all the time, we can’t keep her in.”

I hand her the cat. She walks a few steps, and the cat bolts from her arms. “See, crazy, I told you!”

I go home, assuming poor little calico is inside and warm and that would be the end of that.

The next day, she’s outside.

I didn’t see her that evening, but the morning after, in below freezing temperatures, she was still there.

I came home from work, she was still outside.

That was the last straw.

I went home, grabbed my cat cage, and went to pick her up. She was so trusting, coming right up to me and rubbing against my legs, purring and lapping up attention. We fed her, and she just gobbled it up like it had been a long time.

We decided to at least keep her for a while, to make sure that she could warm up and build up her strength. She had been acting a little more standoffish, though, and would growl and spit if we pet her in a certain spot. We figured something was wrong, so we took her to the vet.

She was without a microchip. They tested her for Feline Leukemia, worms, and examined her. She had a fever, and it seemed like a bite somewhere on her, causing the fever and pain. I have never seen a cat put up so much of a fight during a vet exam, but she did NOT want to let them draw blood. Poor baby.

We received a course of pain meds and antibiotics for her, both of which were a pain, but seemed to do the trick. Of course, during the course of these meds, we ran into another problem – my roomie fell in love.

And so it came to pass that not four, but five felines lived under one roof – officially turning it into the Crazy Cat Lady House. 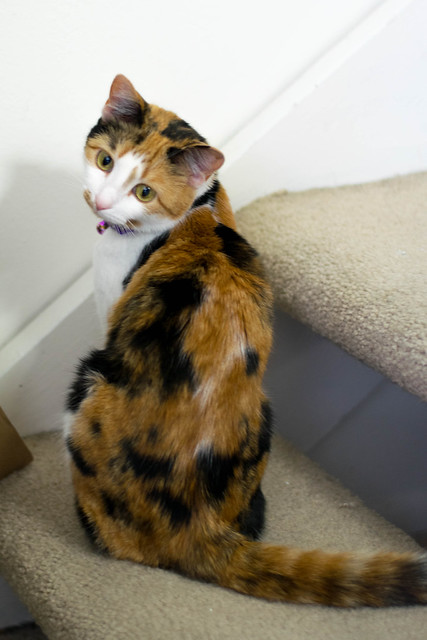 PS  – Due to roomie being jobless and the crunch of the end of year, we had a GoFundMe account set up to cover Sogo’s vet care. Thanks to my wonderful family, our goal has been met, but there are still more costs to come. She needs rabies shots, and she might not be spayed, which would put even more strain on us. If you want to contribute, you can visit the page here.