I’m a bit late in writing about this, but last Friday, I took my first steps into making my own raw cat food. Feeding the bunch quality canned food was getting expensive, and even then it didn’t always sit well with them, so Lisa and I decided that going raw would probably be better for them. I talked my mom into trying it out, and she purchased the grinder on the condition that I would make the food for her crew, too. Once I had everything, I got to work!

Lisa helped document the process, so here we go! 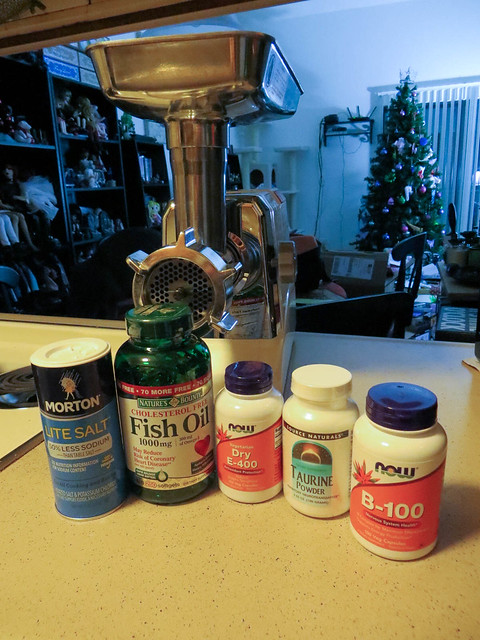 The grinder and the dry ingredients I used. Most I purchased from iHerb.com. Use the link or enter code GZP451 to save $5 on your first order! The Fish Oil I got in a BOGO sale from Walgreens. Salt is from Walmart. 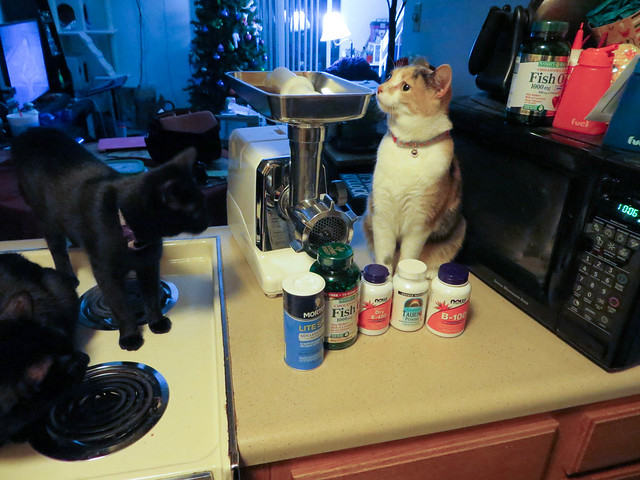 Rio and Aya had to inspect the grinder, as Omi watched on. 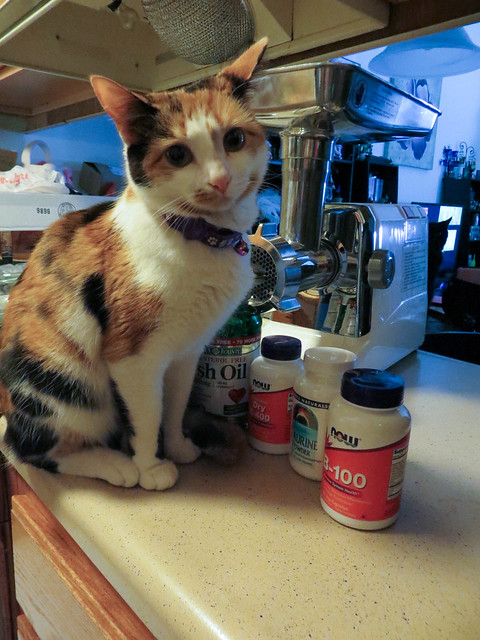 Sogo wasn’t too sure about this. 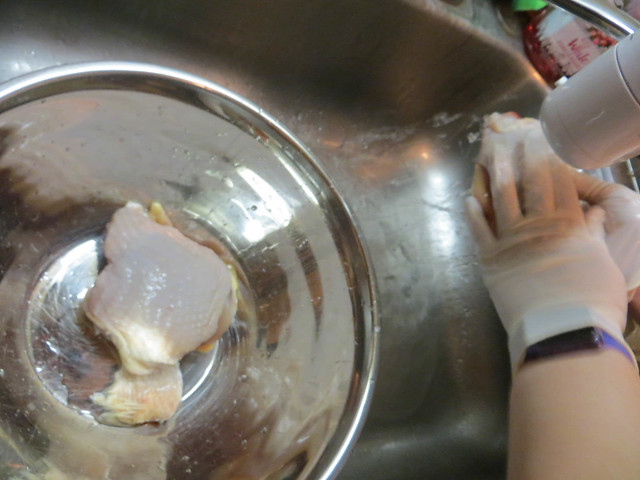 I started off by rinsing all of the chicken thighs to get the surface bacteria off. If I decide to do the partially cooked version next time, this step won’t be necessary. 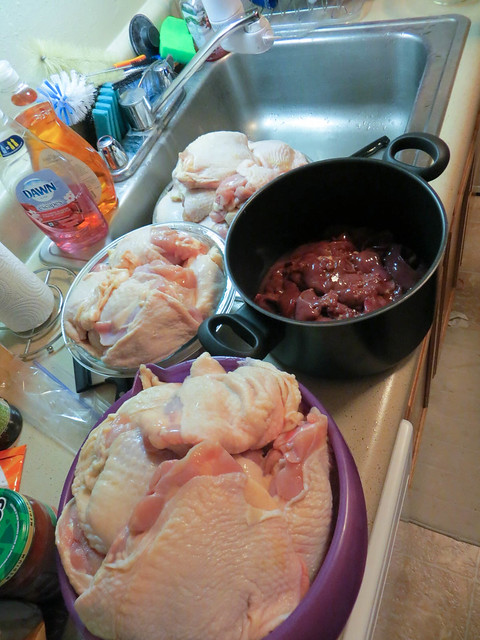 30 lbs. of chicken thighs + 2.5 lbs of chicken livers… I think I need to buy some more big bowls before my next batch! 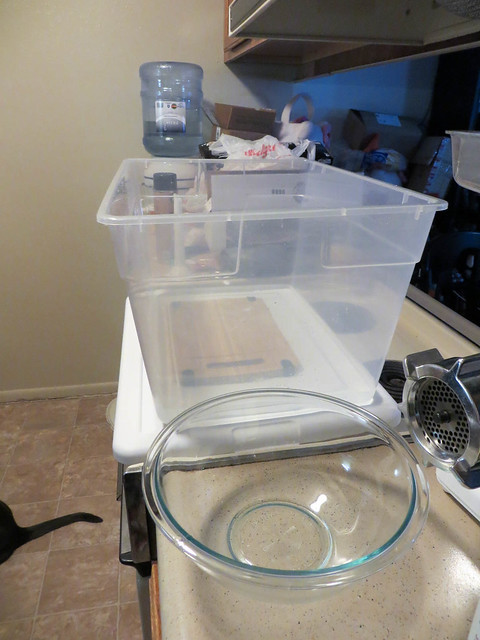 I used this big tub for mixing. I would have benefited from one slightly smaller, but the store I was at didn’t have anything smaller that would still hold it all, so this was good enough. 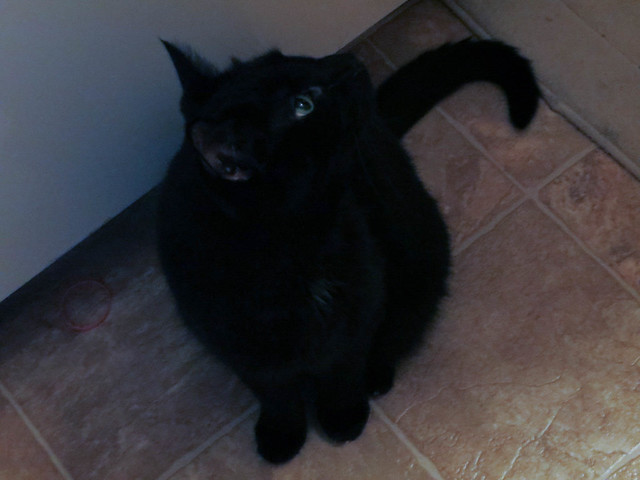 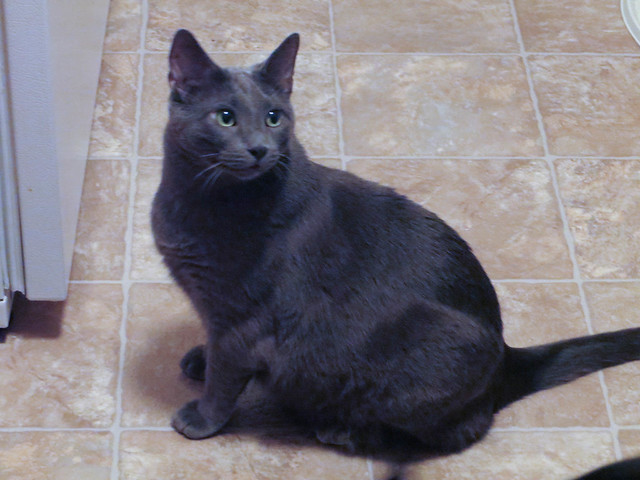 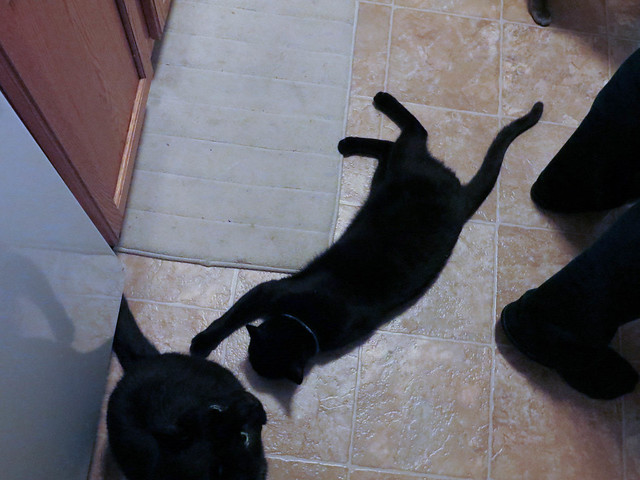 Meanwhile, Aya makes a game out of playing with Omi’s tail. 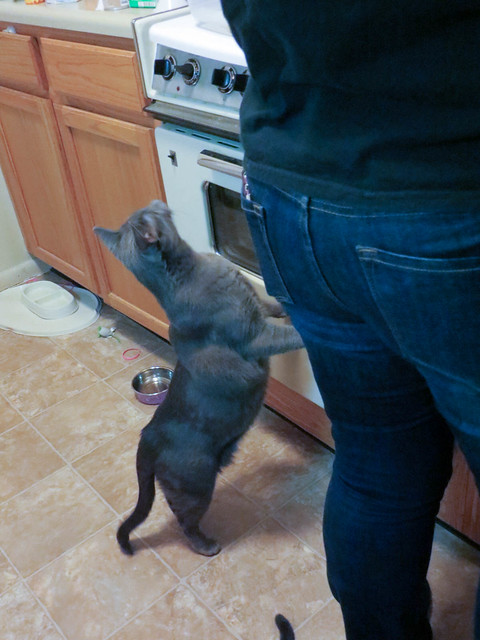 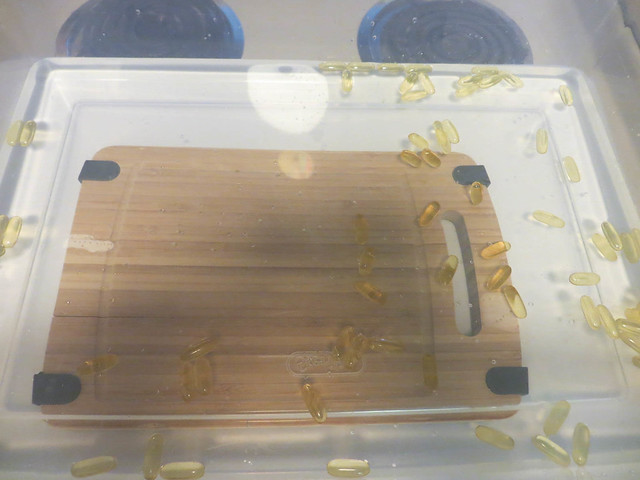 First off, I put the fish oil capsules in the water to dissolve them (they ended up swelling and emptying, but the shells didn’t dissolve completely. Might run them through the grinder next time). 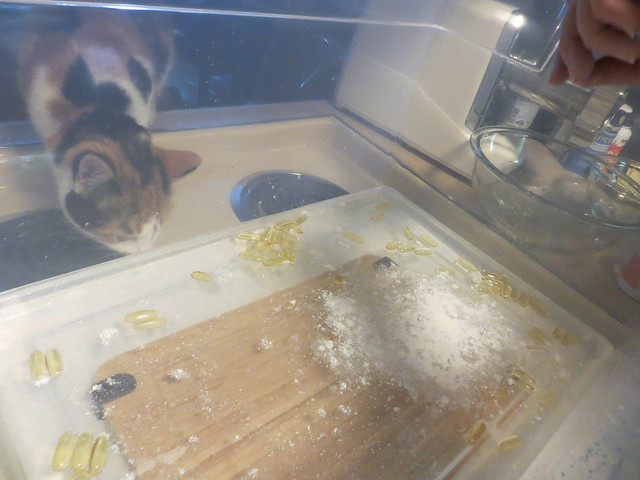 Sogo watches on as I break open the vitamin capsules. 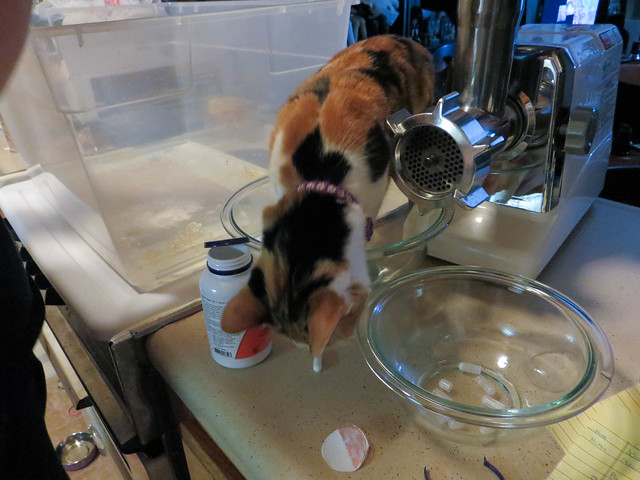 Sogo: “What are these weird things?” 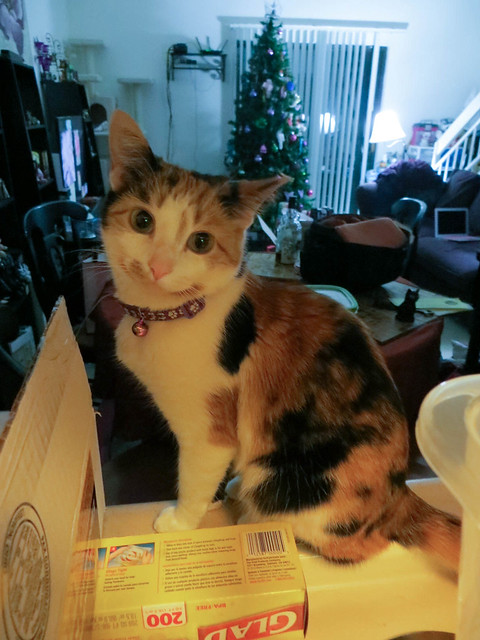 Sogo: “Are you sure this is edible?” 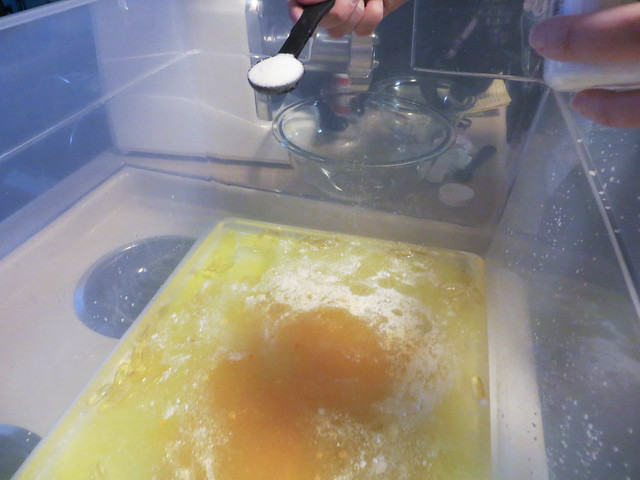 Adding the powdered taurine – necessary when not using fresh hearts. 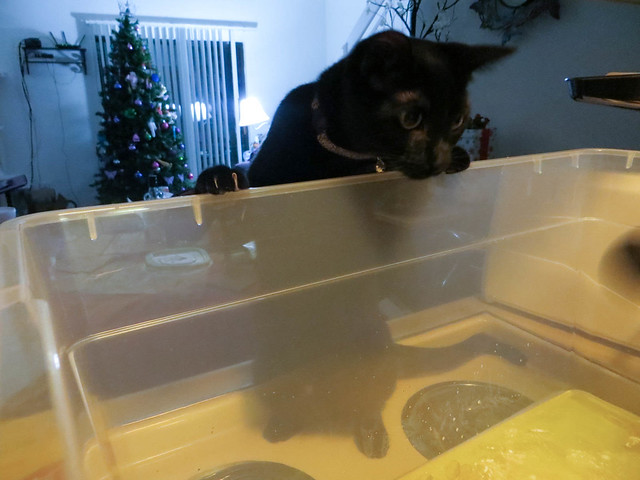 Of course Aya had to see what was going on. 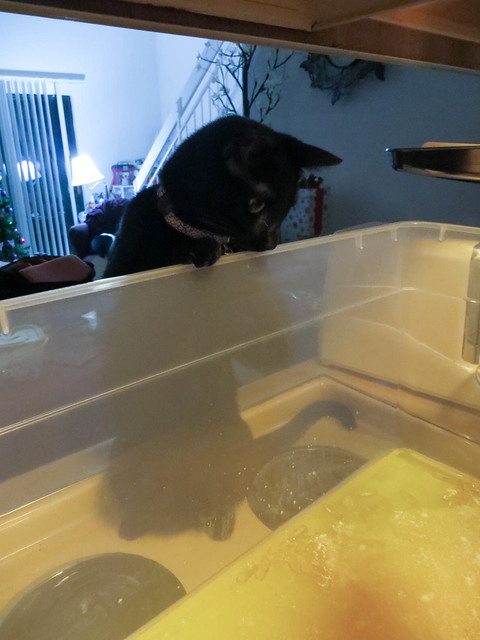 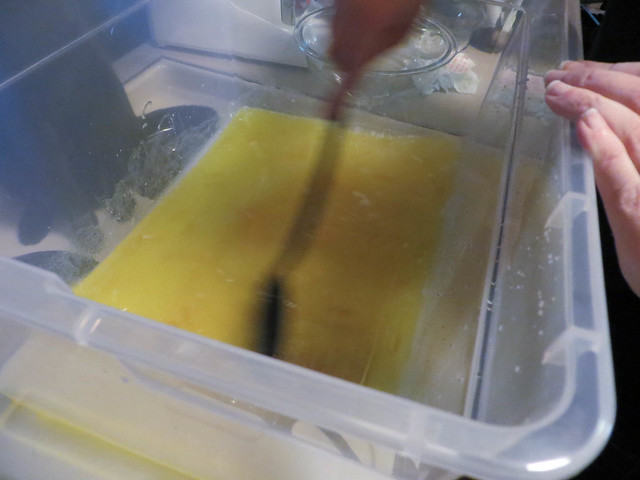 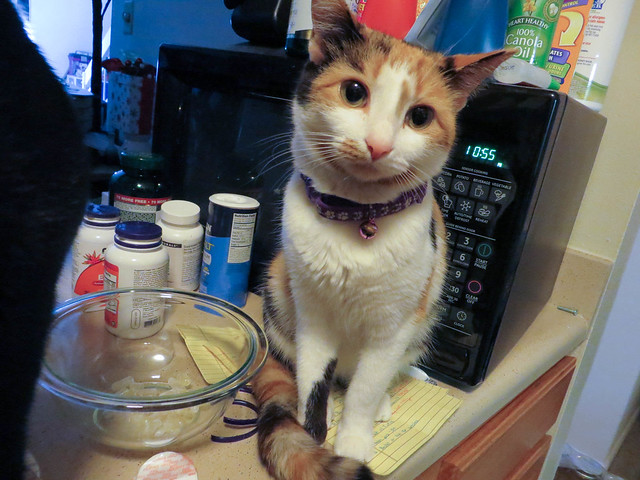 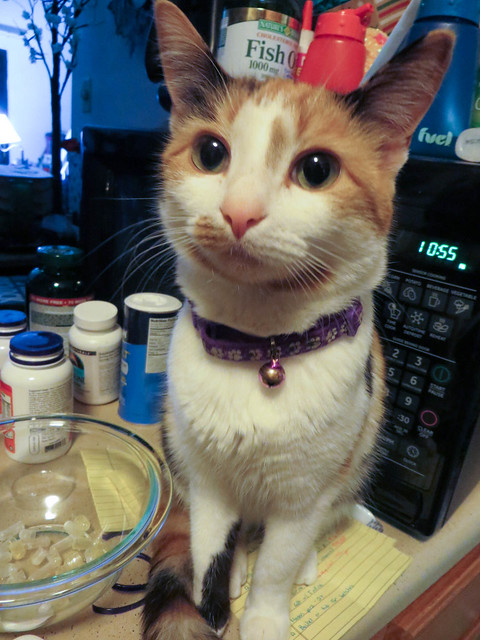 Sogo: “I don’t think you know what you’re doing!” 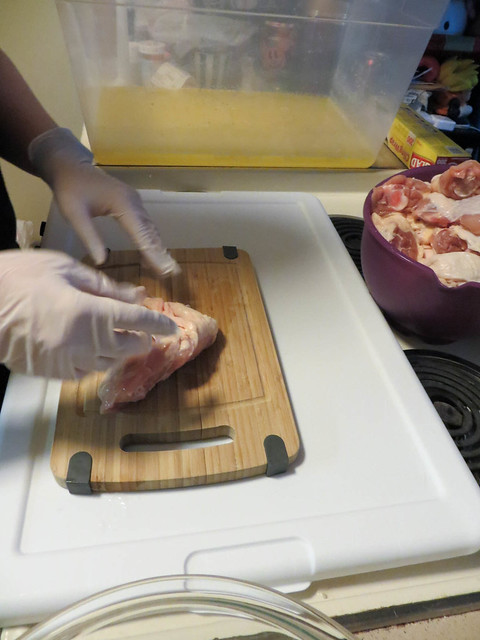 After the vitamins were mixed with the water came the fun part – prepping the chicken for grinding! 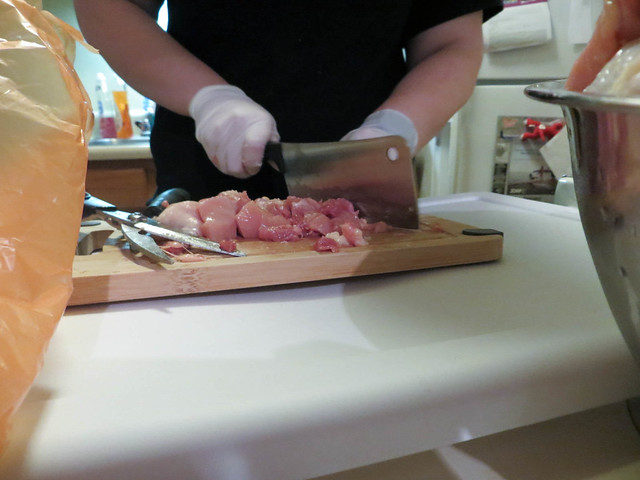 I had to cut the thighs into chunks that would fit in the grinder. As I went, I removed about 50% of the skins, as well as 25% of the bones to keep the ratios correct. As I did this, I prepared a bowl of chunked meat to add a little bit for the cats to chew on for dental health. This was the longest part of the whole process – 30 lbs is a lot of chicken! 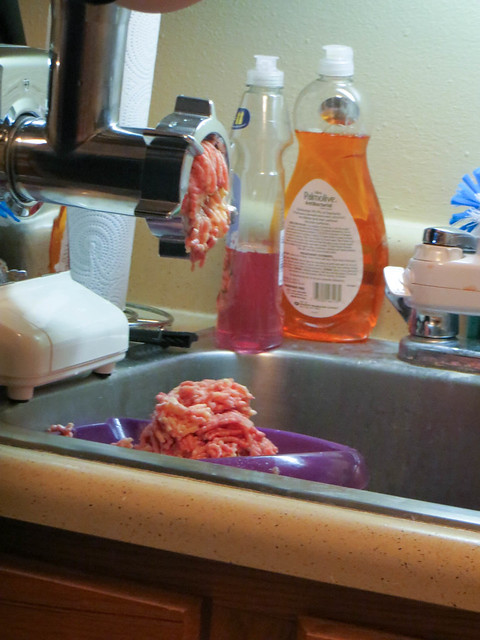 Once everything was processed, I started grinding! This was easiest with a bowl in the sink to catch the ground chicken. That thing is loud – I think I’ll get ear plugs to use from now on. It worked very well, though. We only had one jam, and a quick reverse cleared it right up. 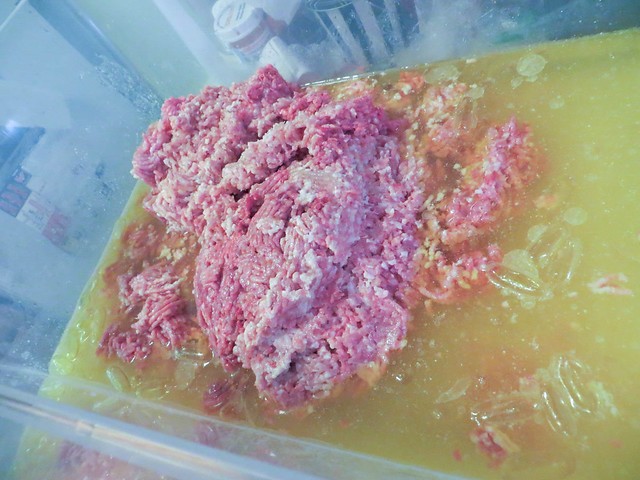 Adding the ground meat to the vitamin mix. 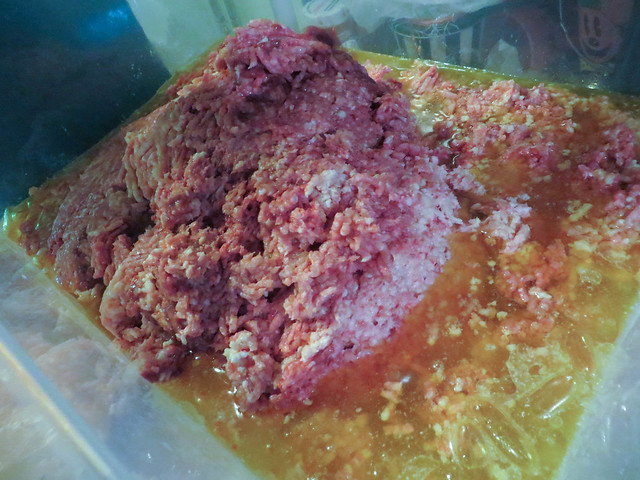 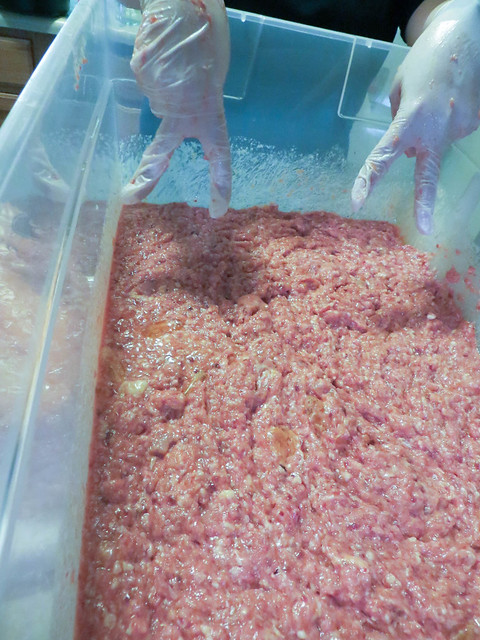 And after a thorough mixing by hand, the batch is complete! 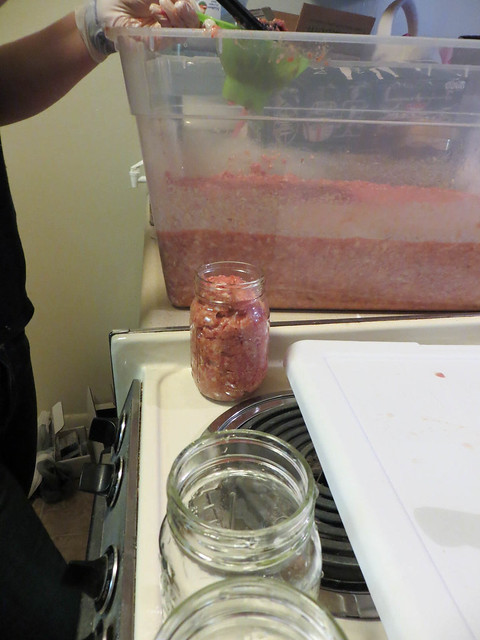 From there, things got messy as we packed the finished food into mason jars. This batch made just over 36 pint-sized jars, or 4 jars per cat (5 cats of mine and 4 of my mom’s). 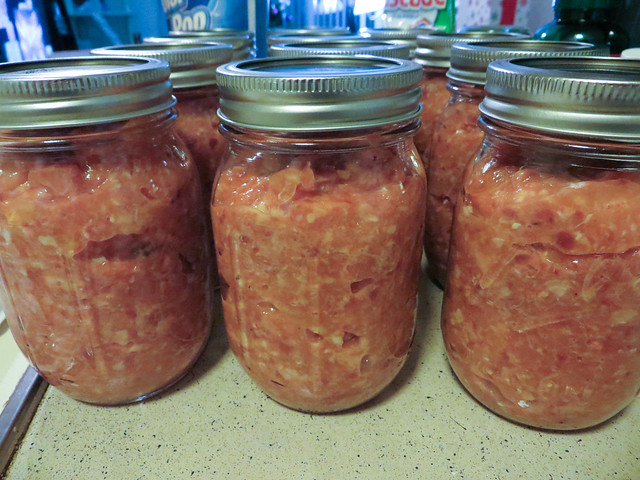 And here we have the finished product, ready to freeze!

The whole batch made approximately enough for 12-14 days per cat. I haven’t crunched the exact numbers yet, but my early figures put the cost at around 60-90 cents per cat per day, much less than buying a good quality canned food.

Of course there comes the matter of transitioning. Our cats were used to a canned food only diet, so it’s been slightly easier working the new food into their diet. Rio was the only one of the bunch who took to the new food right away, gobbling it down with no problem (as well as eating what the other cats wouldn’t touch!)

Since the others are being buttheads, we are currently mixing a small amount of commercial canned food in with their raw food, and they’re finishing it all. We’re very slowly lessening the amount of the commercial food mixed in, with the hopes that eventually we can cut it out altogether.

My mom is having more trouble with her crew, though, as they’re used to mostly kibble, with a little bit of canned food once a day. She has a bunch of super picky eaters, and they don’t even seem to want to eat it mixed in. We might try a few of the suggestions listed on Dr. Pearson’s page and see what we can come up with for them.

This is a huge undertaking but I think once we get them on the right track it will be super beneficial for everyone!